Further Clarification on the PTA and joint mobilization debate

Physical Therapist Assistant rules
PTA rules that have been written are emergency rules and they don't go into effect until the PTA's become regulated in June. They were posted in March which allowed time for review and comment.
http://www.dora.state.co.us/physical-therapy/EmergencyRules_PTA.pdf.- click this link to read the actual rule
Joint Mobilization Debate
It is accurate that the Rule was written that joint mobilization is prohibited UNLESS the PT determines that the PTA meets certain criteria. APTA's position from the national House of Delegates is that PTA's should not be allowed to perform Joint Mobilization (any grades). Despite this position, there are inconsistencies across a variety of states.

Current Rules in Colorado (have been in place for 7 years) do not prohibit PTA's from performing joint mobilizations. The rules are silent. (There is a Rule that specifically states that PT aides can not perform joint mobilization.)
Posted by Colorado Student Physical Therapy Advocacy at 9:42 AM 1 comment:

Hello,
A few bills are still being monitored for progress, please see Julie's last email. The board was established last year per last year's sunset act is still working on the wording of rules regarding PTA responsibilities. Currently in the rule, PTAs are not allowed to perform sharps debridement, triggerpoint dry needling, therapy on animals, or joint mobilizations. There is some wording in the rule that would allow a PTA to perform joint mobilizations, including grade V, if their supervising PT has determined that they are properly trained. In order to ensure patient safety and our right as a profession to perform grade V mobilizations, the GAC has recommended to the board that the wording be changed to simply PTAs can not do joint mobilizations. Grades of mobilization are not included in the rule, and the rules are not meant to very specifically spell out what PTAs are allowed to do so adding specifics about joint mobilizations does not seem to be an option. Other issues that are still being heavily discussed are continued competency and dilemma regarding recent graduates not being able to work for a few months until they are able to take the boards.
If you have any issues about current governmental affairs, please don't hesitate to contact us.
We will do our best to answer your questions or refer you to the correct people to talk to. Also please check the state advocacy page on the APTA website http://www.apta.org/StateIssues/ for more information (you do not have to be an APTA member to view this site). While you're there, click on the Take Action tab and document your activity for the Student Advocacy Challenge
LET US KNOW YOUR THOUGHTS??
Posted by Colorado Student Physical Therapy Advocacy at 5:44 PM 1 comment:

This is just a quick update from the Government Affairs Committee. We have been hard a work identifying bills pertinent to Physical therapy practice in the state of Colorado. Over 25 bills are being monitored as they move through the senate and the house.

News from the physical therapy board includes that new rules concerning PT assistants went into effect on March 1, 2012. One of these new rules states that PTA's can not do joint mobilization UNLESS the supervising PT feels that the PTA has had the proper experience and training. This includes all grades of mobilization (including grade V, thrust mobilization).

Small meetings are taking place between the acupuncture lobby and PT's who use dry needling. There has been reported progress from the perspective of the PT's in educating acupuncturists in how dry needling is different from their practice.

The board is also reviewing the continuing competency requirements in the state of Colorado. It sounds like there will be changes coming to these requirements sometime soon.

The Colorado APTA chapter recognized the University of Colorado PT program for hosting the second, annual Legislative Day at the state capitol on Feb. 28, 2012.  Check out the story on the CO APTA web page at https://webmail.ucdenver.edu/owa/redir.aspx?C=0eba34647cf34309868622c9444d8ce7&URL=http%3a%2f%2fwww.aptaco.org%2f
Posted by Colorado Student Physical Therapy Advocacy at 1:30 PM 1 comment: 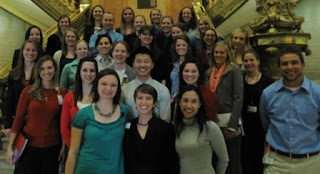 It was a great turnout from the CU PT students at this year's legislative day! Over 40 students met at the capitol to speak with state legislators on what it means to be a physical therapist?  The afternoon began with guest speakers, followed by a tour of the capitol and meetings with our legislators. A highlight for our group was meeting with Senator Linda Newell.  A couple of us had met with her the year prior which made it nice to reconnect again this year.  She was so welcoming to our visit and most importantly we were able to educate her on direct access.   Check out more pictures and information at http://www.aptaco.org/!
Posted by Colorado Student Physical Therapy Advocacy at 8:57 PM 1 comment:

The 2nd CU PT STUDENT LEGISLATIVE DAY will be February 28,2012.  Hurry up and sign up if you haven't already- there are only 5 more spots open!
Email Julie or Terra to reserve your spot!
Julie Engle-julia.engle@ucdenver.edu
Terra Wishon-terra.wishon@ucdenver.edu

Join other students who are just as passionate as you about our profession and our future! It will be a great day to come together and tell legislators why PT's are the practitioners of choice
Posted by Colorado Student Physical Therapy Advocacy at 2:12 PM No comments: 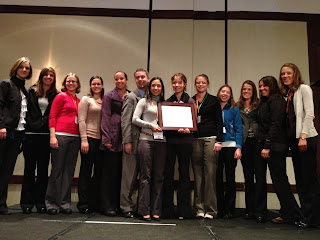 (picture taken at 2011 National Student Conclave)
UNIVERSITY OF COLORADO- APTA STUDENT ADVOCACY CHALLENGE WINNERS!
This year the physical therapy students at the University of Colorado have worked very hard advocating for issues we felt were important. We have held various events in order to increase awareness and educate legislators on important issues regarding our profession. We hosted state legislators on campus, met with state lobbyists, held “lunch-and-learn” lectures and have been committed to writing letters to our legislators. The most exciting experience was the 1st annual CU PT student Legislative Day at the Colorado state capitol. On that day, thirty students from our DPT program met with legislators in small groups and spoke about important issues involving the sunset of our practice act.  We also had students attend the CO Government Affairs monthly meetings to remain up-to-date on important state legislation and relayed this information to the students.  All in all, this has been an exciting experience for all of us who participated.  It was a team effort that focused on advocating for the profession of physical therapy and support of Vision 2020.  We look forward to this year's challenge!
Posted by Colorado Student Physical Therapy Advocacy at 3:38 PM 1 comment:

Colorado Student Physical Therapy Advocacy
Our goal is to educate students on becoming effective advocates, inform our community of important events and issues requiring our attention and provide resources to further our effectiveness as student advocates. We hope to increase awareness and action at the student level to foster a stronger community of Physical Therapists who actively fight for the advancement and protection of our profession.